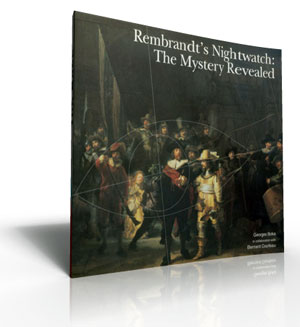 Writing is not normally a skill found at a graphic design studio. But in my case, after 16 years working at major media companies and two years publishing my own weekly, it would be abnormal if I had not become involved in writing projects.

In 1994, Quebec painter and art historian Georges Boka asked my help to write an English-language book in which he would explain the mystery behind Rembrandt’s most famous painting, The Nightwatch: Specifically, why Rembrandt inserted 33 characters in his famous painting, rather than the 32 he had been commissioned to paint.

When it was published — under the title Rembrandt’s Nightwatch: The Mystery Revealed — I sent a copy to Washington Post Publisher Don Graham, who wrote back to me in a letter dated July 1994:

“The book is extraordinary. It is most handsome, and the story…is clearly one worth knowing.”

An excerpt is here for you to read. You be the judge as to what results when French and English cultures mingle!

P.S. It must have been love or lunacy because four years later (1998), I agreed to co-write with Georges a controversial 28-page booklet promoting the theory that Rembrandt had jointly executed The Adoration of the Shepherds with Benjamin Gerritsz Cuyp, a prolific 17th century painter. An excerpt from that booklet is also available here for you to peruse.